You might think that the only way you can know whether the grouted cells, bond beams, insulation and other components of a CMU (Concrete Masonry Unit) wall are properly placed, is to open the wall with hammer or drill, where the grout or insulation is supposed to be and see if it is there. 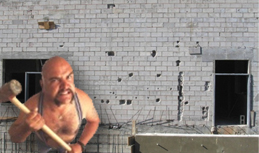 This test is inadequate, because this sample is much too small (often less than one ten thousandth of a percent). Also, the tiny sample does not show where blockages (to the proper filling of insulation) and/or too much grout exists. The only other effective options are to X-ray the walls or tear them down, which are both extremely expensive.

There is a method that is accurate, non-destructive and inexpensive. This is the way to see the grouted cells in the entire wall section.

BlockWallScanIR™ infrared testing method can be performed at any time during the construction process without interrupting any other trades or affecting the progress of the rest of the building.

Structural problems in a CMU building are a real problem. If the wall receives a trauma like a hurricane force wind or tornado and customers or workers inside the building are hurt, the legal ramifications can be devastating. A forensic examination of a block wall laid on the ground post-event will most likely reveal some structural deficiencies. The building owner, architect, structural engineer, general contractor and masonry contractor can and probably will be accountable if and when these deficiencies are documented.

However, two benefits arise from having a BlockWallScanIR™ infrared test performed on your newly constructed CMU walls. First, a documented record of the grouted cells and other structural components (in-situ) is created. Secondly, when and if deficiencies are found, a report can be generated so that corrections can be made with surgical precision.

The owner gets what he paid for and the designers can ‘literally’ see that their specifications have been followed.

Infrared imagery is often a grayscale picture whose scales (or shades of gray) represent the differences in temperature and emissivity (opposite of reflectivity) of objects in the image. As a general rule, objects in the image that are lighter in color are warmer, and darker objects are cooler. No object in the images is detected via visible light wavelengths (400-700 nanometers) rather, only from infrared wavelengths in the 3000-5000 microns or 8000 – 14000 microns range. Lights and other relatively hot objects are very evident, but as a result of their heat…not light emissions.

When an image is taken with an infrared camera, it is often recorded onto videotape and/or digitally saved to an on-board media card. The image may be then modified in a number of ways to enhance its value to the end user. In the case of the printouts enclosed with BlockWallScanIR reports, the building images are digitized, saved and converted to jpeg images, then adjusted for color, contrast and brightness before being scaled and placed into a report file. The file is then sent digitally to the client.

After sunset, wall areas that contain grout are a different color because the heat (from daylight sunshine and the resulting thermal change) radiates from these areas longer than those areas with empty or insulated cells. When the building structure cools down, we scan the walls with a sensitive infrared camera to detect the sources of heat and record them for later analysis. Since we can “see” all areas with more mass (filled cells) we can immediately determine if there is grout missing. When structural deficiencies are found, we make a matching visual image with a digital photographic camera for reference.

For more information on this testing method, download a white paper on the subject...